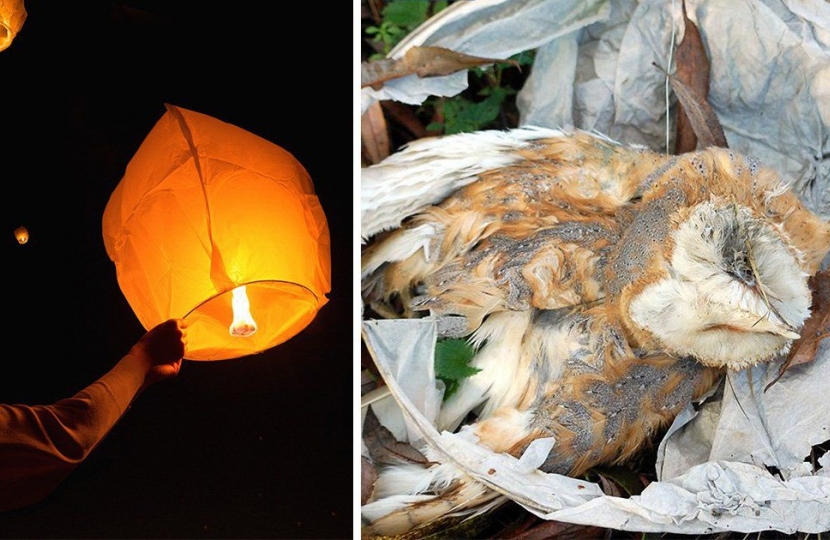 PEOPLE and animals will be safer after South Lanarkshire Conservatives helped the council adopt robust new restrictions on sky lanterns and helium-filled balloons.

The release of the items has increased in recent years, with often devastating unintended consequences.

Pets, wildlife and livestock can be hurt or killed by the remnants that have fallen back to earth, while the flames from sky lanterns risk starting wildfires that endanger communities.

Conservative councillors secured cross-party agreement in April for the authority to explore the possibility of creating a new bylaw banning the release of such items anywhere in South Lanarkshire.

At the council’s executive committee last Wednesday (15 August) the Tory Group threw its weight behind the proposals. It means the release of sky lanterns and balloons is now banned from any council-owned land or council-assisted event.

The leader of the opposition Conservative Group, Councillor Alex Allison, said: “Many people who have released sky lanterns or helium-filled balloons would be horrified to learn of the damage and suffering they cause.

“The National Farmers Union, the RSPB and the SSPCA are among the organisations that want to see them banned. It’s right that the council act to protect South Lanarkshire from their terrible unintended consequences.

“We want to see this authority use its full powers to deal with this issue. This new policy has been identified as an effective way to prohibit the release of these items, so it was right that we gave it our support.”

The new policy also gives councillors the power to require a ban on their release before they will grant a public entertainment license for any event.

That was welcomed by the Conservative Group spokesman for licensing and community safety, Cllr Mark McGeever.

He commented: “Most of us have become much more aware of the risk plastics and other discarded items pose to animals, with the danger that they mistake man-made debris for food and suffer serious harm.

“The fact is a small flame from a sky lantern could devastate wildlife and the local environment. Dealing with the consequences also risks tying up firefighters, with other crews having to be sent from further afield to deal with life-threatening emergencies like house fires or road accidents.

“This policy gives elected councillors the power to refuse a license for any event that would put our communities at risk by allowing lanterns to be released.”

As part of the new policy South Lanarkshire Council will take steps to raise public awareness of the impact caused by deliberately releasing sky lanterns and helium-filled balloons.

Councillors also received assurances that there will be a sensitive approach when discussing the restrictions with people who may seek to release them as part of bereavement services or cultural occasions.

This will include the suggestion of possible alternatives that may be thought fitting, such as the release of flowers into flowing water or the planting of trees.